Skiathos Island is Magical and combines the crystal clear blue waters with numerous beaches surrounding the island and rich nature all over. The atmosphere of Skiathos Town or any other area/village is unique. Each place in Skiathos features a unique experience for the eyes and soul and worth exploring while you stay.

The video of Skiathos Project is a simple preview of what those guys are trying to do, which is capturing all of Skiathos Island beauty through their camera lenses. Take a peek of what Skiathos is all about! 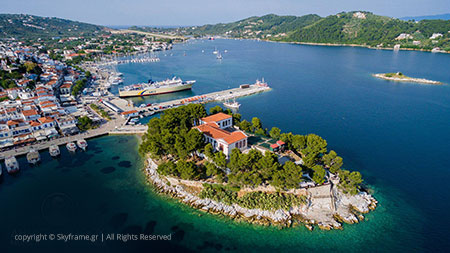 Bourtzi
Bourtzi is a small peninsula which separates the port of Skiathos in two. In the past it was a fort, which was established by the Gizi brothers who occupied Skiathos in 1207. It was surrounded by walls battlements and embrasures and on the left and right of the gate there were two round towers. It is not possible to determine the height of the walls by the present ruins.

Nowadays, Bourtzi is really a rare recreation place. It is full of pine trees, always with fresh, cool air and with a magnificent view. The old primary school has been converted into a picturesque cultural centre, with the initiative of the present municipal authorities. In it, there are practical conference rooms in good taste and a fabulous summer theatre which hosts successful theatrical and musical performances every summer.

The History Of Evagelistria Monastery Immersed in the greenery, deep in the Lekhounio gorge beside the springs in the place called Agalianos, under Karaphlytzanakia, the highest peak on Skiathos, stands the Holy Communal Monastery dedicated to the Annunciation of the Virgin, the Evagelistria Monastery or Vagelistria as it is called by the Skiathians. Construction of the monastery was started in 1794 by a group of kollyvados monks who had been forced to leave the Holy Mount of Athos in the face of disturbances resulting from disputes over the celebration of Canonical Requiem Masses Saturdays rather than Sundays. The objective was a return to the tradition of the Ancient Orthodox Church. The group leader was Niphon, an Ordained Monk, whose worldly name was Nicholas “from the line of the Nicholarades”, who was born in 1736 at the village of Patrika on the island of Chios. He served in the Monastery of the Greatest Banner and the retreat of the Omnipotent on the Holy Mount of Athos. Initially he went to Samos, Patmos, Leipso and Icaria where, in 1775, he founded the monastery of the Annunciation at Leucada. Amongst the monks at the Monastery of the Annunciation was one Gregorios Khadjistamatis, a Skiathian, who, upon the death of his father, inherited extensive property on Skiathos. Possessing this large estate Gregorios persuaded Niphon to move to the green island of Skiathos and establish a new monastery, abandoning Icaria “for the all-pervading barrenness and unwholesomeness of the place”. Construction of the monastery complex was completed in 1806 and it became the epicenter of the kollyvados both during the disputation and in the following years. The kollyvados spirit has profoundly influenced the life of the Skiathian islanders and that most significant writer of (modern) Greek prose, Alexander Papadiamantis and also of the Skiathian author Alexander Moraitidis. Father Niphon, first abbot and founder of the monastery passed away at the age of 73 on the 28th of December 1809. The second abbot and co-founder was the Skiathian Gregorios Khadjistamatis (1809 – 1815). Subsequently, and to this day, there have been 30 other abbots the last of-whom is the present abbot, Father Angelos Lyssaris.
The Monastery of the Annunciation provided significant moral and material assistance to the pre-revolutionary movements as well as during the revolution of 1821. It was there, that in the year 1807, the first Greek flag with the white Cross at its center on a blue background was designed, woven, blessed and raised. It was on this flag that Father Niphon swore in the guerrilla leaders Theodore Kolokotronis, Andreas Miaoulis, Papathymios Vlakhavas, Iannis Stathas, Nikotsaras, the Skiathian Teacher of the Nation, Epiphanios – Stephanos Dimitriadis and many others following the great assembly held at the monastery to lay out plans to liberate the (Greek) Nation. The philosopher priest, Theophilos Kairis, following his conviction by the Holy Synod in 1839, was confined to the Monastery.
The Church of Christos sto Kastro was the cathedral of the medieval city. It is a basilica with a wood cut roof, built in the 17th century. It has worthwhile frescoes and a wooden icon screen dated in 1695. This is the church which has been praised the most by Alexandros Papadiamantis and Alexandros Moraitidis in their Christmas novels.

Papadiamantis House
Papadiamantis was born on the island of Skiathos. The island would figure prominently in his work. His father was a priest. He moved to Athens as a young man to complete his high school studies, and enrolled in the philosophy faculty of Athens University, but never completed his studies. He returned to his native island in later life, and died there. He supported himself (very meagerly) by writing throughout his adult life, anything from journalism and short stories to several serialized novels. The house where Alexandros Papadiamantis was born on 4th March 1851 does not exist today. It was sold and the new owners knocked it down. Papadiamantis grew up and died in the new house his father built in 1860, as it is said on a built-in inscription on one of its walls. This house is located about 100 metres inland from the eastern coast of the city, in a narrow street which is a dead-end. It could be said that it is a sidestreet of the present Papadiamanti street. The smallest room on the right was in the beginning a priests room where Adamantios, Alexandros father, kept his books and his vestments. Later, it belonged to Alexandros and he used it as a bedroom and a study. It resembled a monastery cell with a window, a built-in cupboard and his narrow and small bed. Right opposite the entrance, there is the living-room of the house with a coloured diamond-shaped design on the ceiling as the only decoration.The house is generally a simple, austere island house. Today the old entrance of the house which is on the western side is closed. The entrance side and the visitors enter the house – museum through external wooden stairs.
Kastro
Around the middle of the 14th century, because of the continuous pirate raids, the people of Skiathos were forced to set up their city in Kastro, a peninsula on the northern part of the Island, which was a natural fortress. In order to strengthen this fortress they surrounded it with walls full of embrasures and cannons tumed to the land. These were very strong and tall. Communication between the fortress and the land was done by means of a wooden mobile bridge, which joined the fortress gate with the hill that faced it. In case of emergency it was pulled towards the inside part of Kastro and as a result it did not allow enemies to enter. On top of the external gate there was a terrace with the essential “zematistra”, (a skillet full of hot water to scald intruders). From the time it was built until 1453, Kastro was under Byzantine rule. Later, until 1538 it was under Venetian rule and until 1821 it was under Turkish rule. For a small period around 1660, Kastro went again under Venetian rule. Throughout these years the life of the people was very difficult and at times even hellish since apart from the continuous pirate raids and the aspiring conquerors, the people had to face the problem of limited space in the inside of the castle fortress. Therefore, the houses were small and built very close to each other. Despite this, in Kastro there were more than twenty churches, a mosque without a minaret from the time of the Turkish accupation, and the required water tanks. The Cemetary was located outside the city. Ever since Kastro was abandoned, in 1830, and with the establishment of the independent Hellenic State, it was left to its own devices. As a result, nowadays only two churches have been saved (Gennisi tou Christou (Christs Birth) and Agios Nikolaos).
Church of Panagia Preklas
There is also the church of Panagia Preklas which is half ruined. We can see today a part of the wall with the gate, the marvellous terrace with the “zematistra”, the half-ruined mosque and some ruins of the Turkish headquarters. There are also two tanks and the cannon of Anagia which have been saved. Definitely Kastro is the most important site of Skiathos, since it combines the wild and imposing natural beauty with history. Together they narrate other times in a melancholy way, through the ruins.